By now you might have heard of a few different bugs ([1],[2]) with LND that has left the Lightning Network temporarily crippled and most nodes in a state where funds can be stolen from them. This has occurred twice within a month and is due to LND's reliance on a library that also pretends to be a bitcoin node and is seldom looked at or maintained, called BTCD ([3],[4]).

Luckily the fix was released within a day, both times. So most people would not lose funds if they updated promptly, though there are still some HTLC edge cases that exist that would allow an attacker to take off with funds within even a few hours. If you've been in a coma and you're just now hearing about this, I'm sorry. The responsible thing to do is to close your channels before you go into a coma.

About a month ago, a few friends and I released a tool called LNsploit. LNsploit's sole purpose is testing out and finding vulnerabilities that exist on Lightning. There's a lot of work that's planned to go into it, but the initial proof of concept was demoed during a TABConf workshop that I believe was a great success.

Initially, there was not enough time to build any actual exploits into LNsploit because most of the time was spent making the Text User Interface and building in Lightning Network functionality by building multiple nodes into it with LDK. It was the Sunday before TABConf and I get a text from benthecarman that LND is broken. One of the first things I ask is if it's reproducible to put into LNsploit and then we get to work. I spent about 24 hours with the help of Ben trying to figure out how taproot works, how to create a large 998/999 multisig transaction, etc.

I admit, I have sat through entire lectures at Austin Bitdevs about Taproot but I just didn't get more than the surface level. Implementing Taproot script was a thing of its own. After almost giving up, Ben spends about an hour taking a last stab at it and gets it in there, we now have our first exploit!

Not only that, but instead of partying all TABConf, a few devs including Ben and I burn the midnight oil in the hotel lobby to get in another attack - broadcasting an old channel state transaction. When you combine this with the LND bug, you can successfully steal money from an LND node that does not update in time. I was able to demonstrate that during the TABConf workshop and many attendees were able to follow along to completion (minus a few code bugs that prevented a few of them, this is still a work in progress).

Fast forward to now, Ben was able to get in the new LND bug into LNsploit much easier. Many thanks to him, LNsploit would just be called LN otherwise.

Now on to the actual attack! Before I demonstrate how to steal sats from an unpatched LND node, let me go over a few things.

Let's demonstrate how to combine the LND bug attack with a previous commitment transaction to effectively steal funds from an LND node!

There are a few prerequisites for running the software and regtest network. 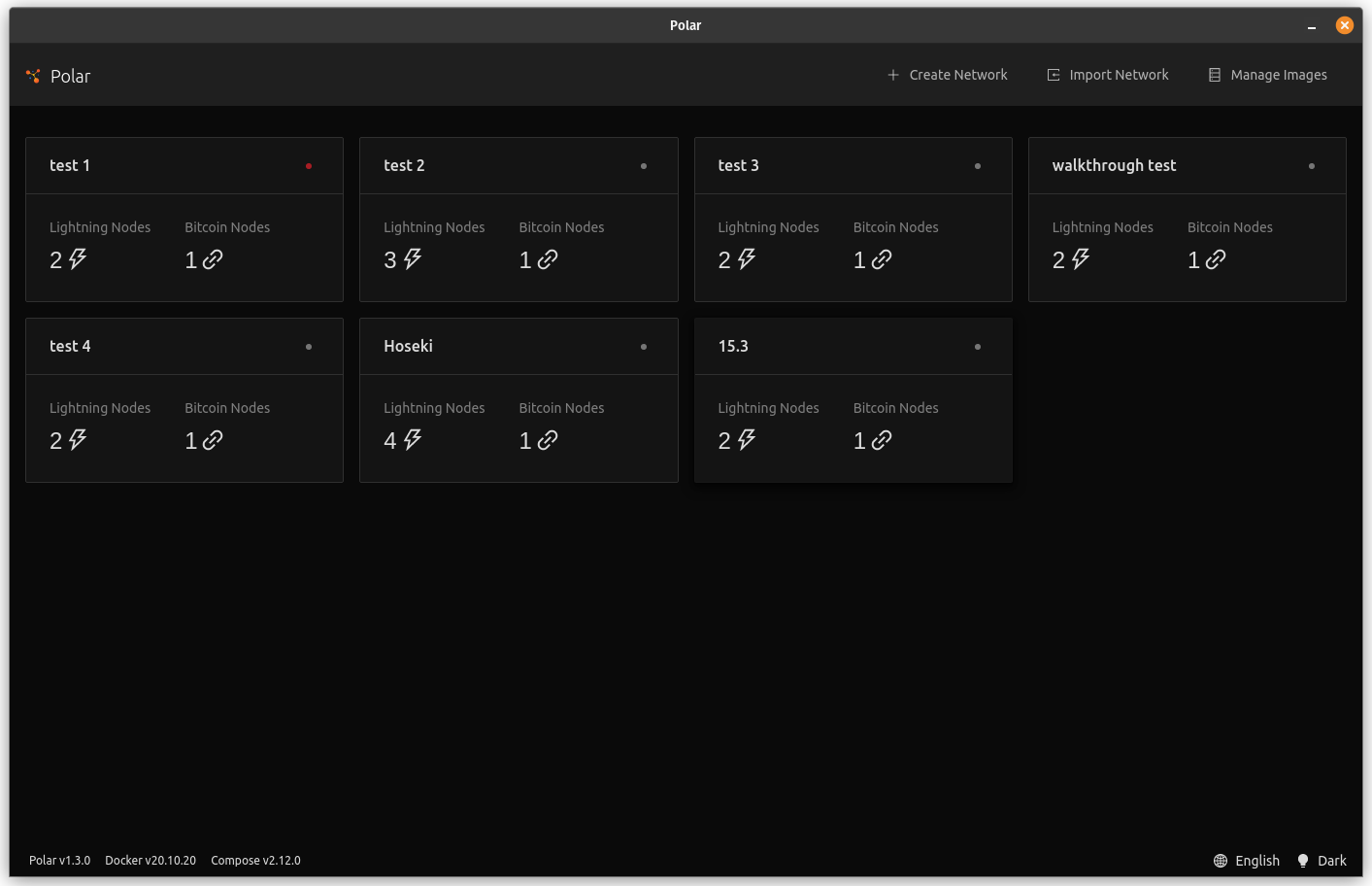 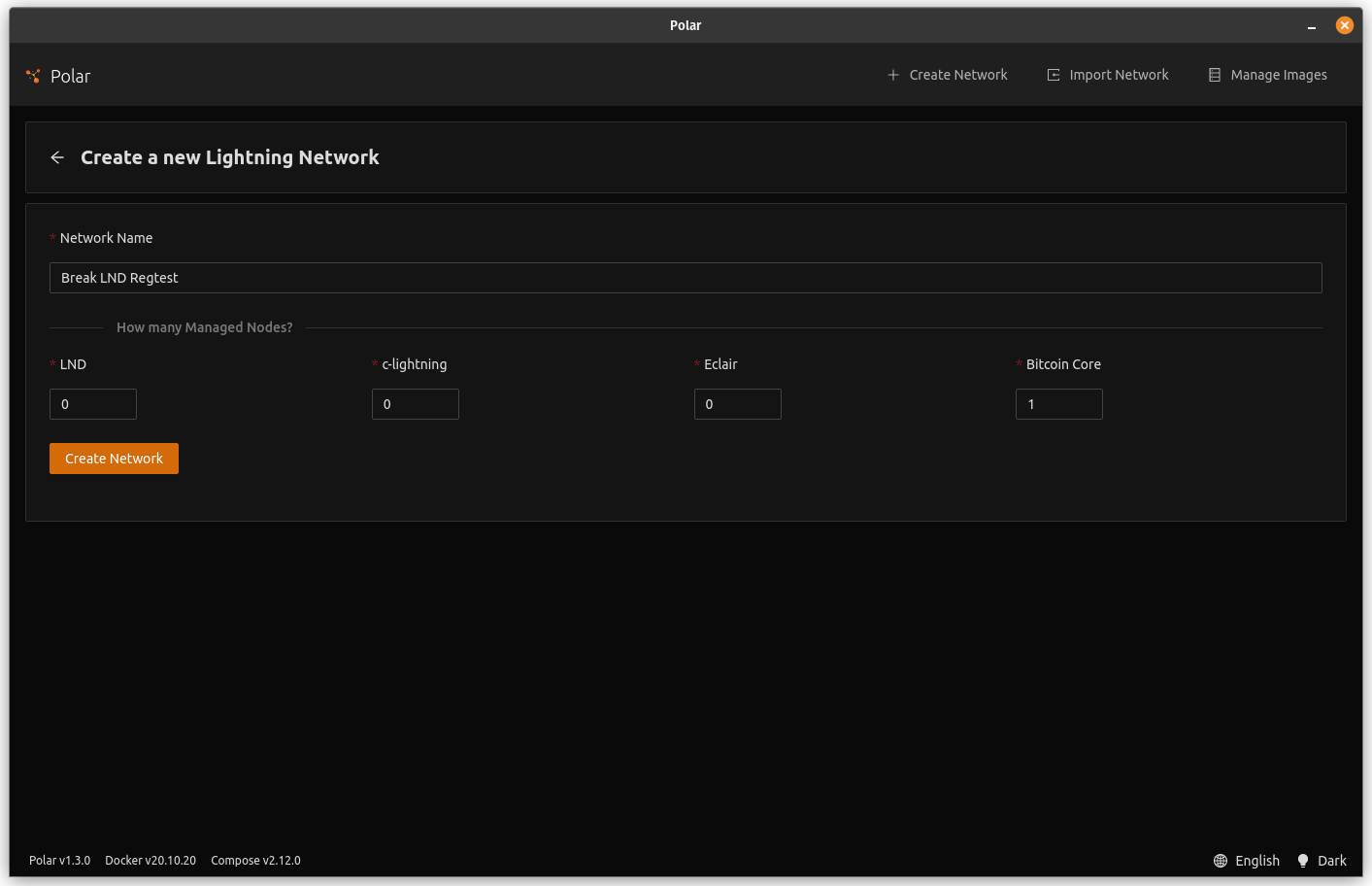 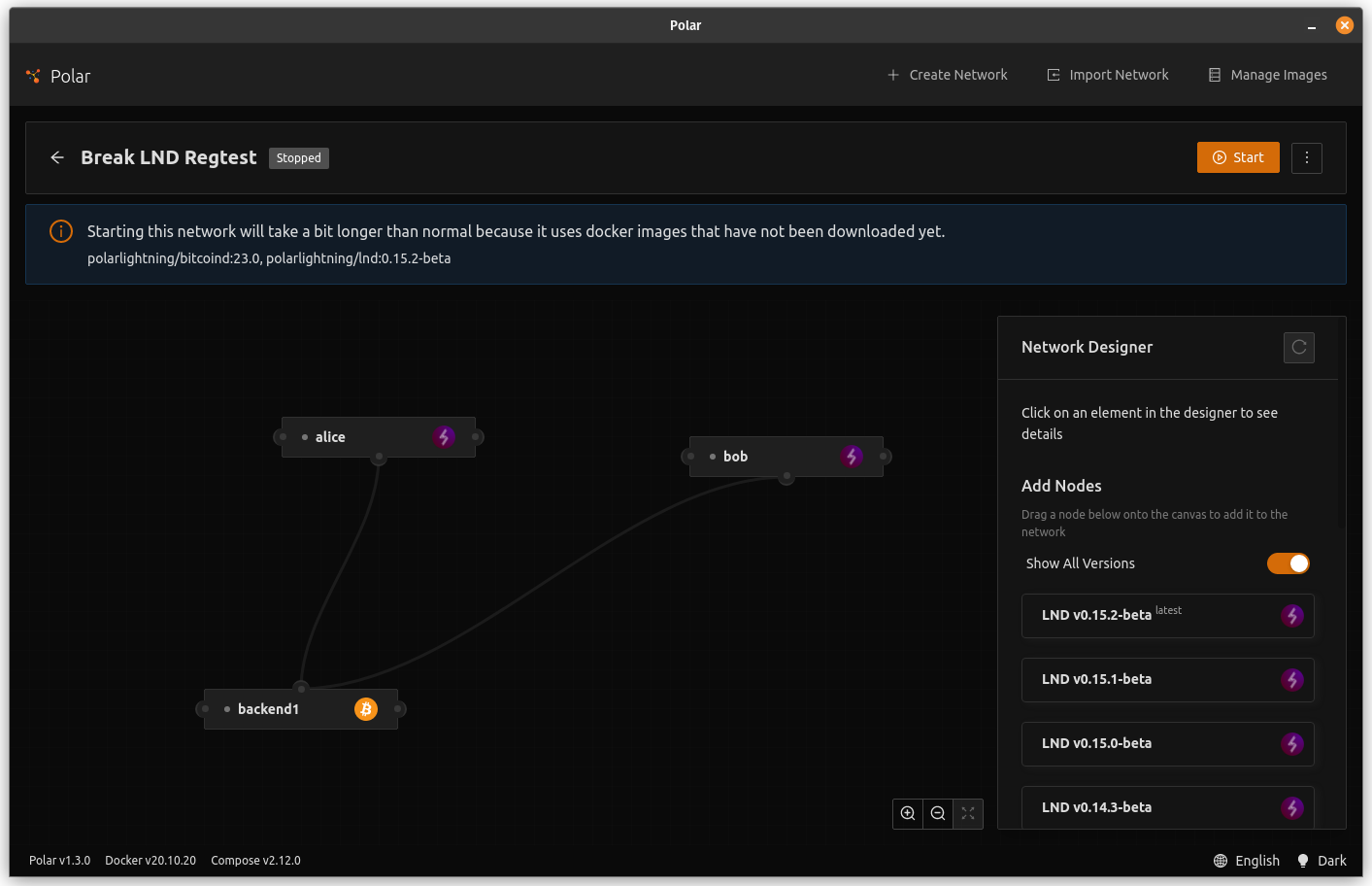 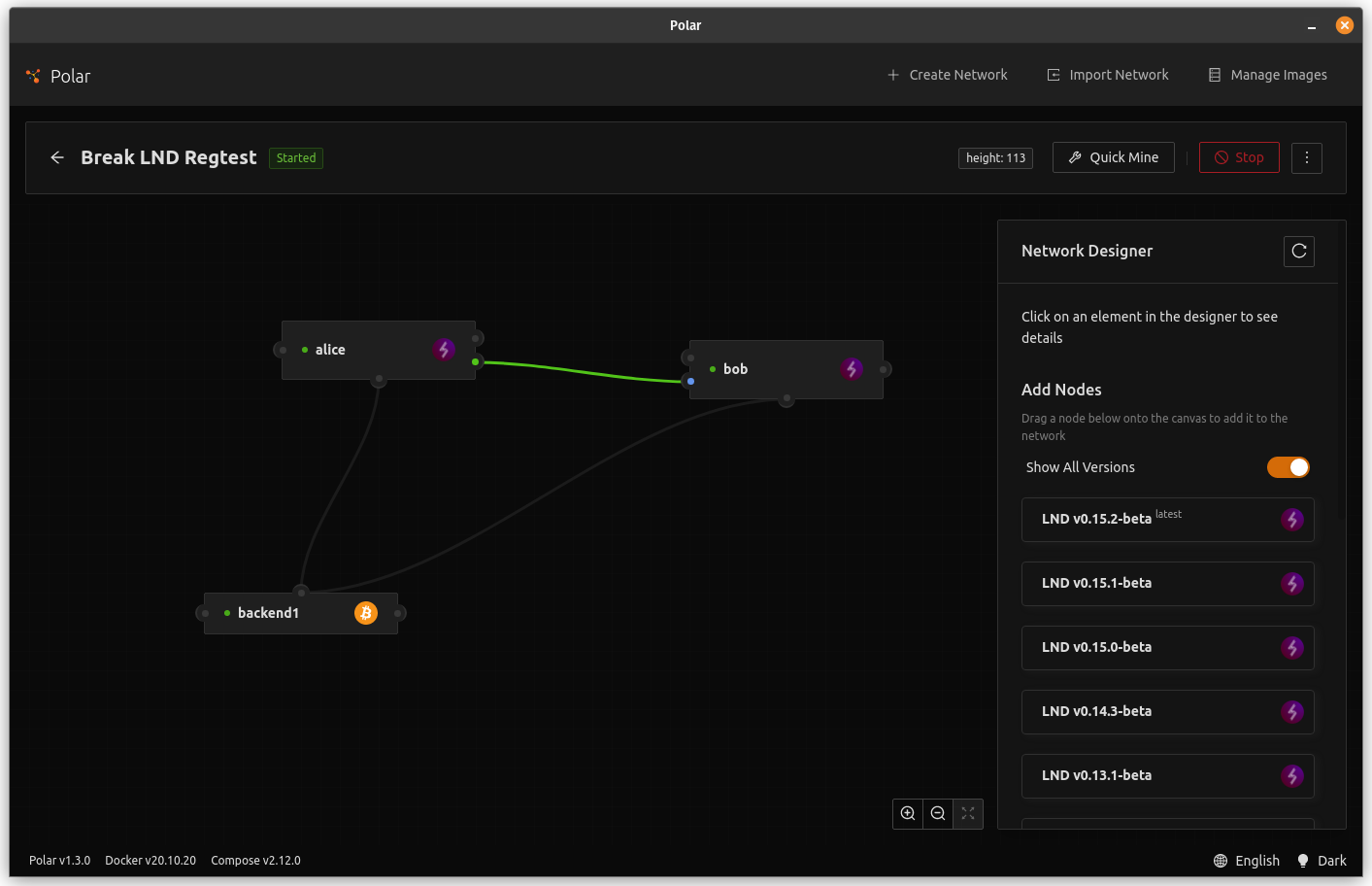 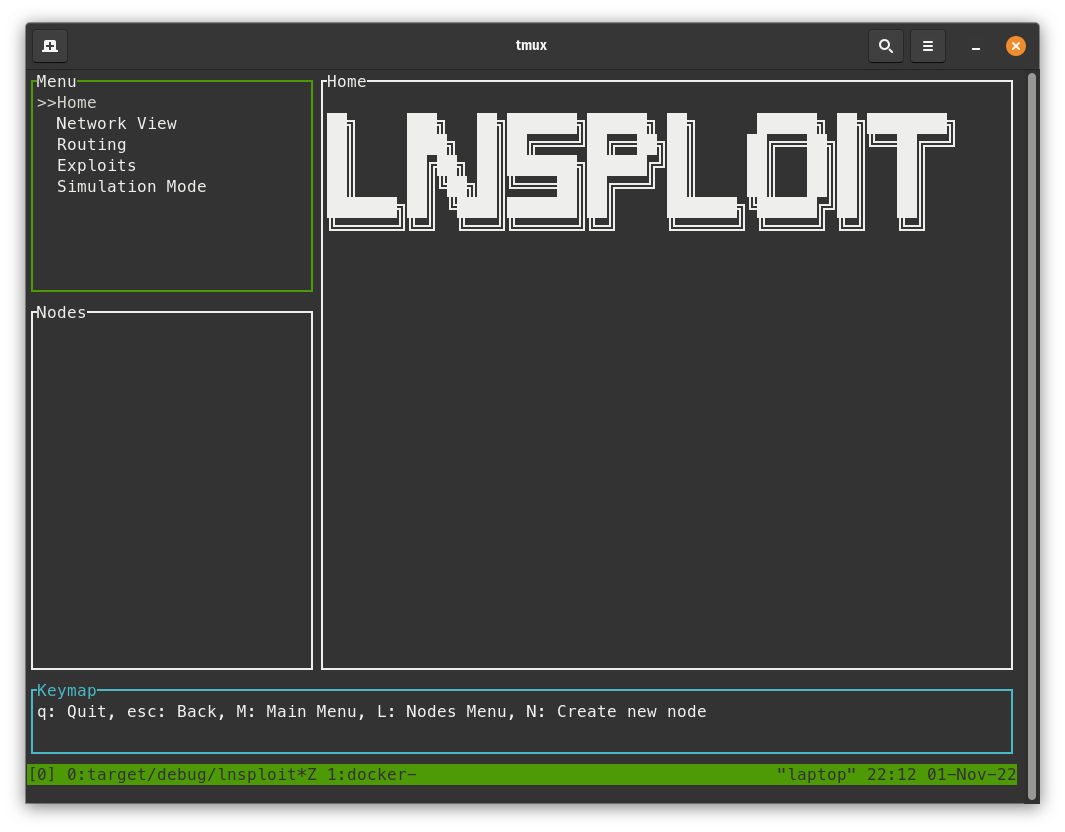 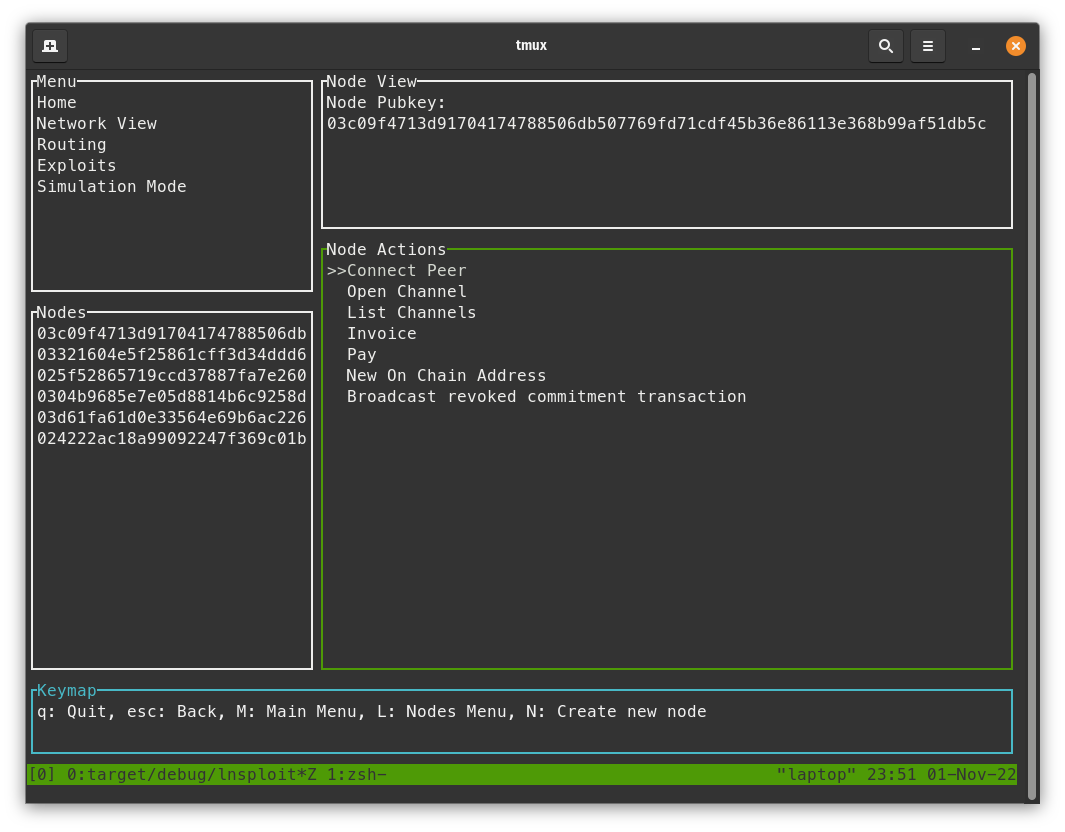 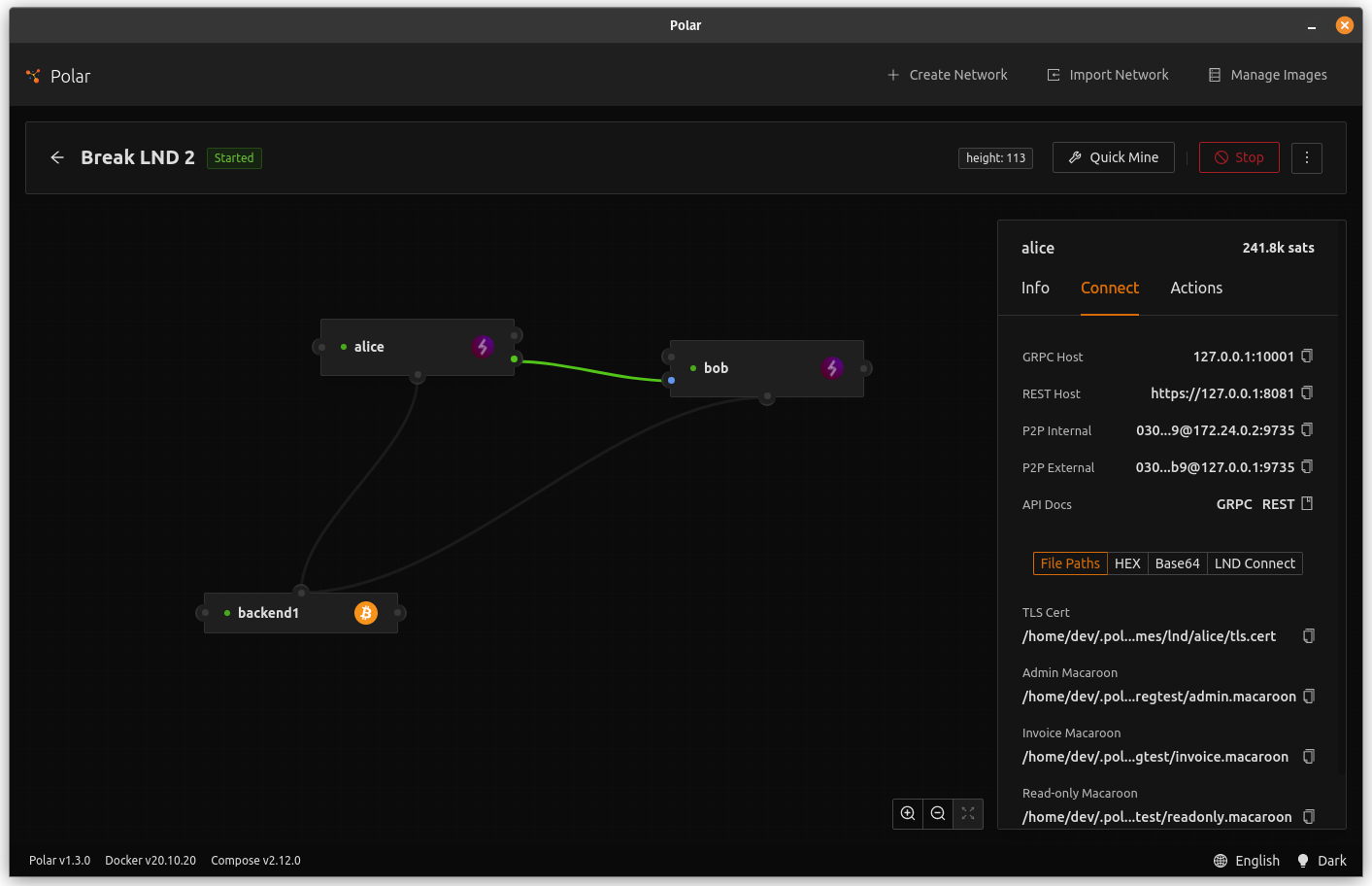 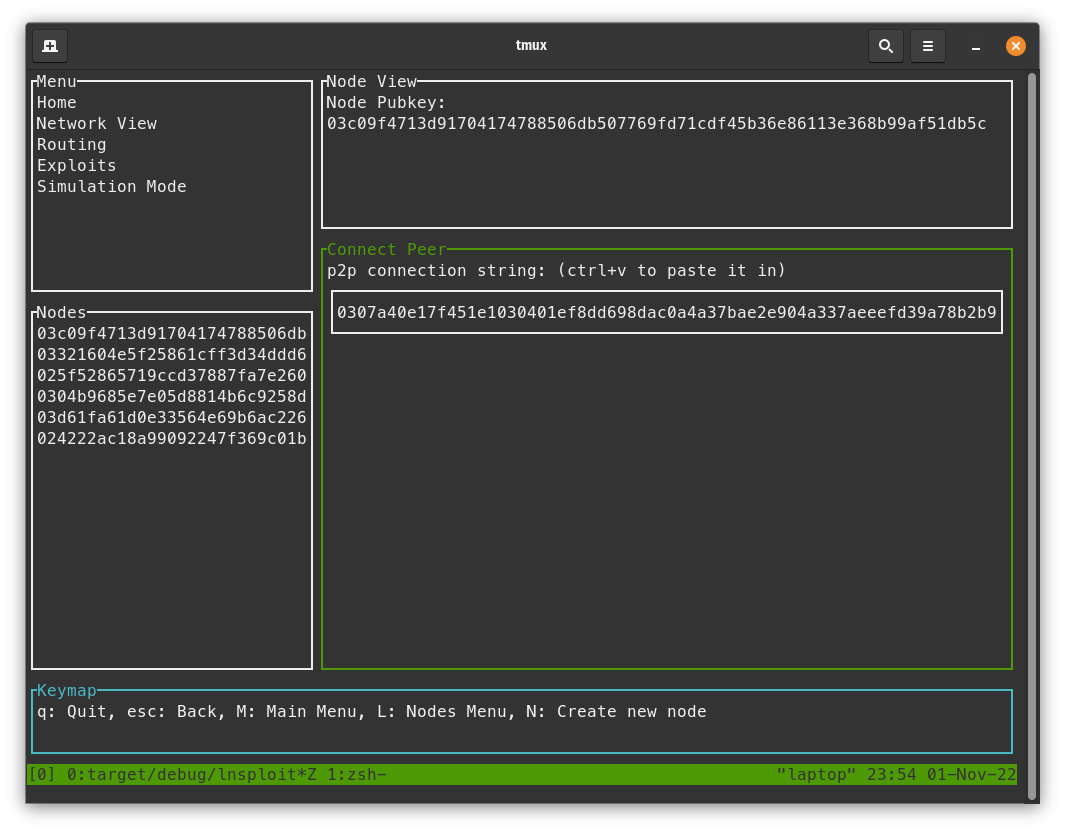 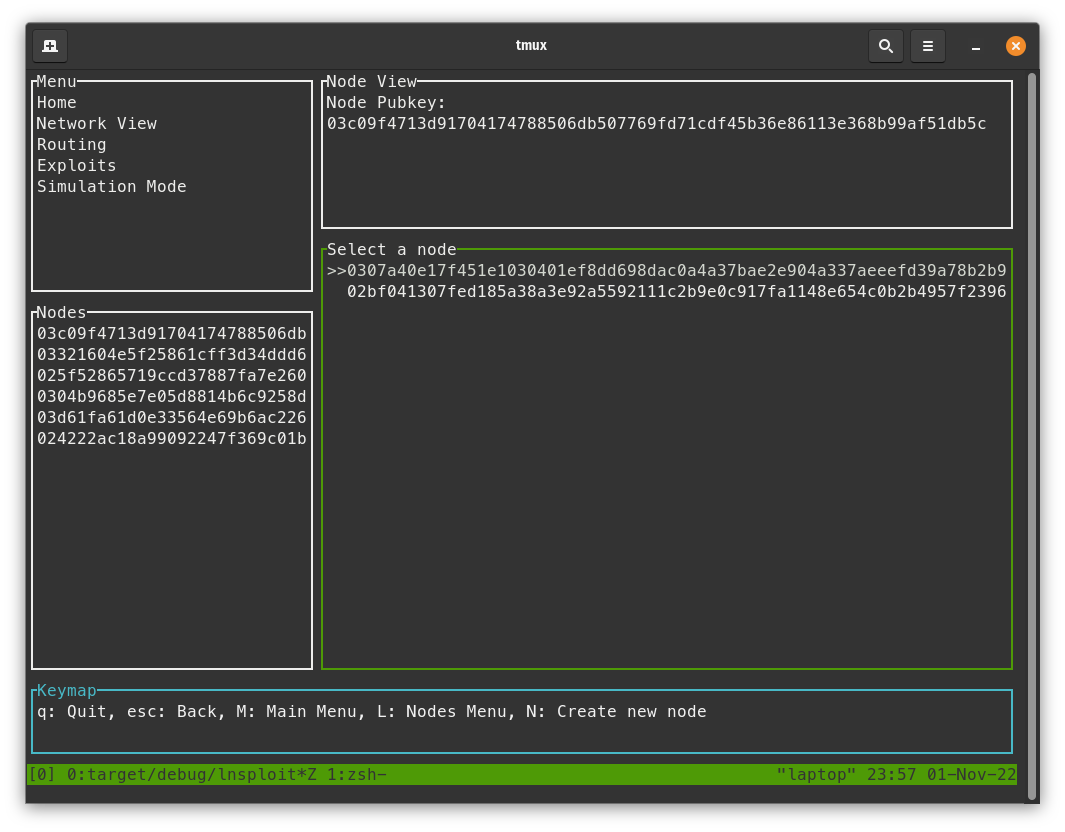 Pay Invoice from each Alice and Bob

Spend down our channel some so we have an outdated channel state that we can broadcast later. 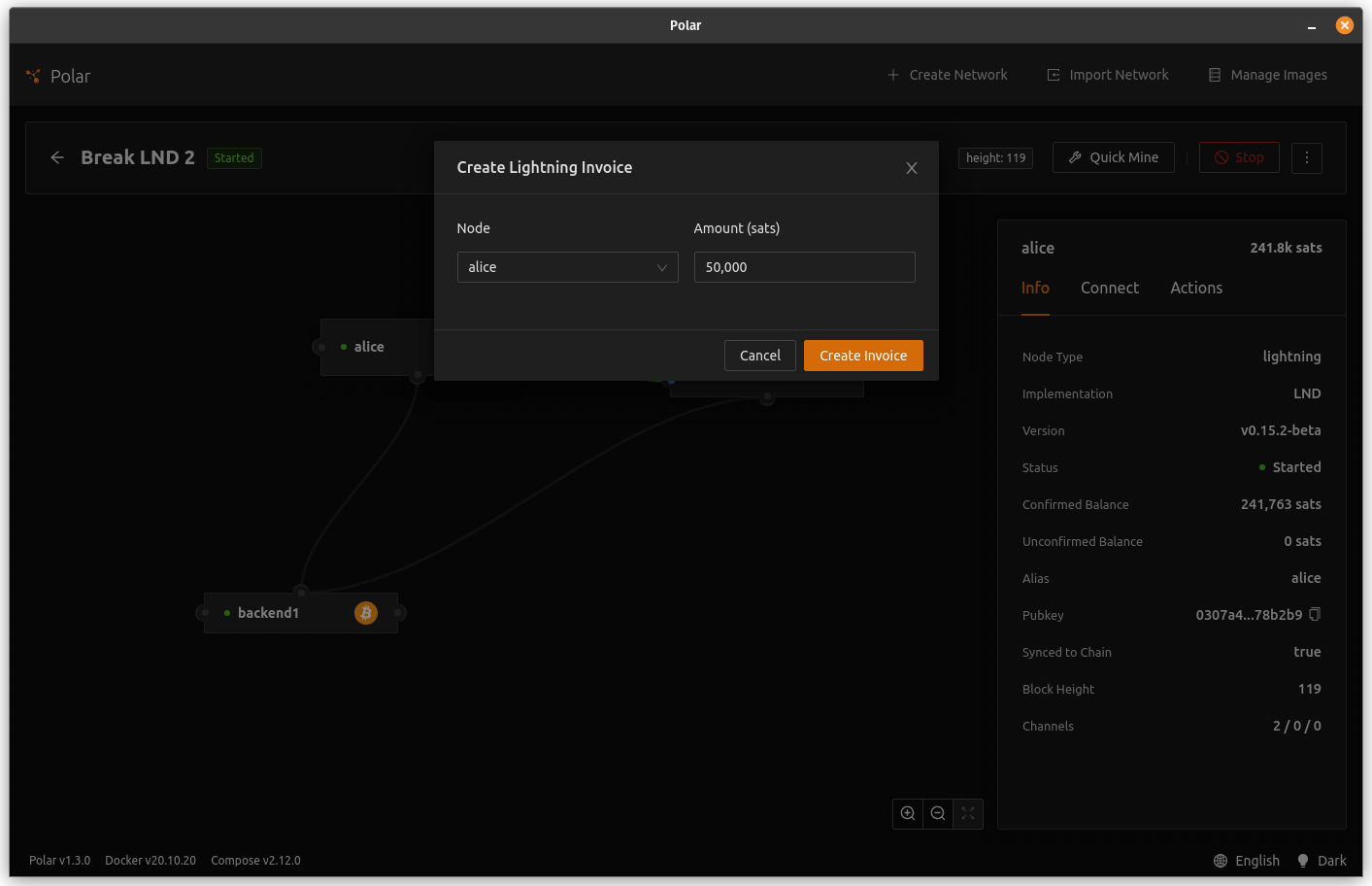 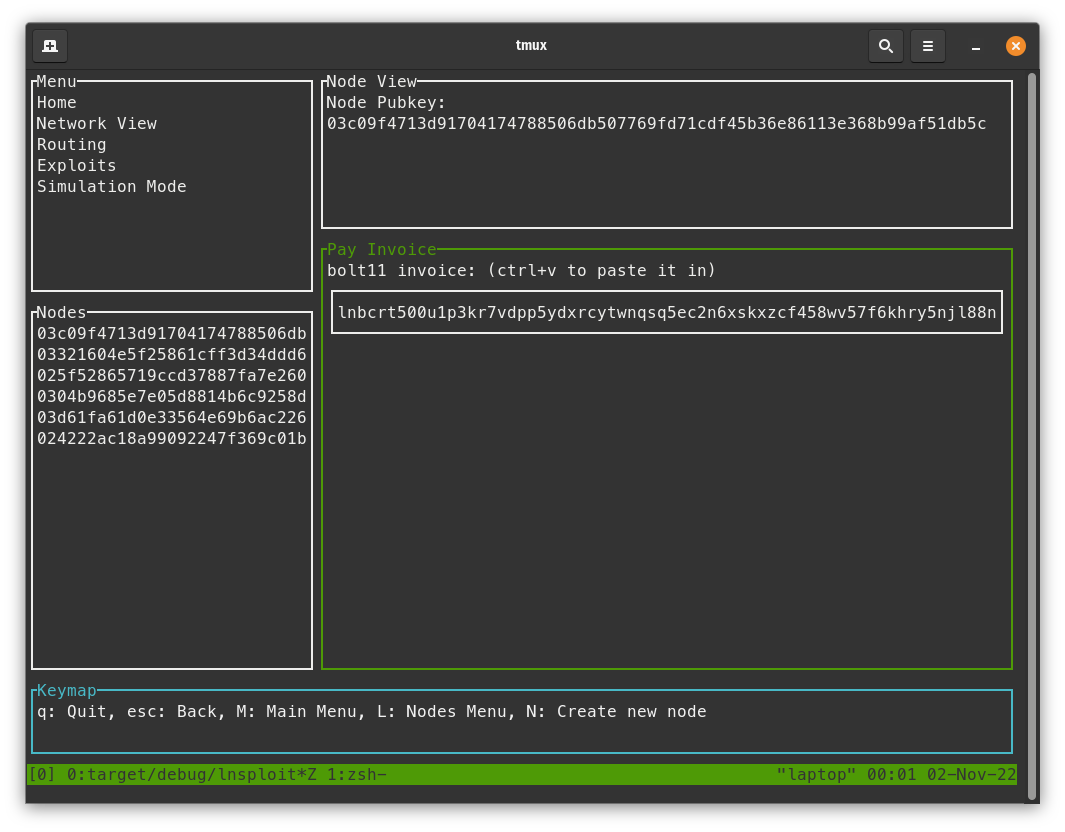 Let's break the v0.15.1 LND node by broadcasting one of the large transactions that broke them on mainnet. For this test, we can demonstrate that the v0.15.1 node breaks but the v0.15.2 node does not. 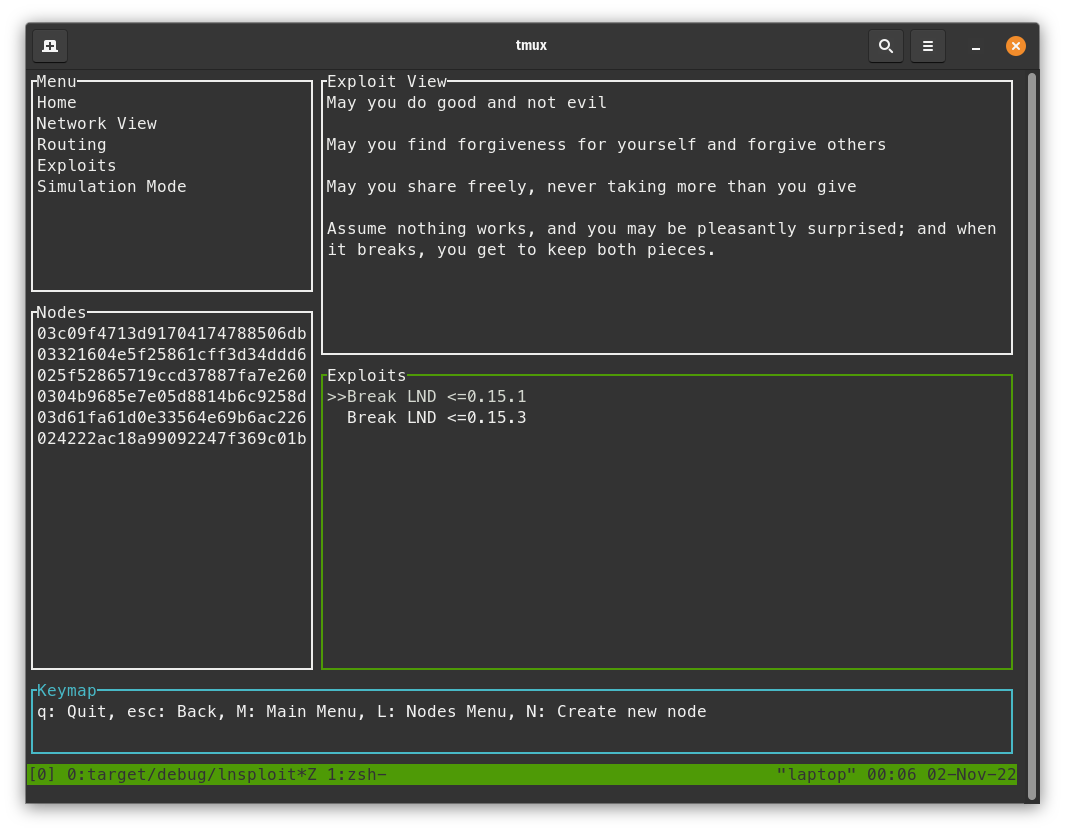 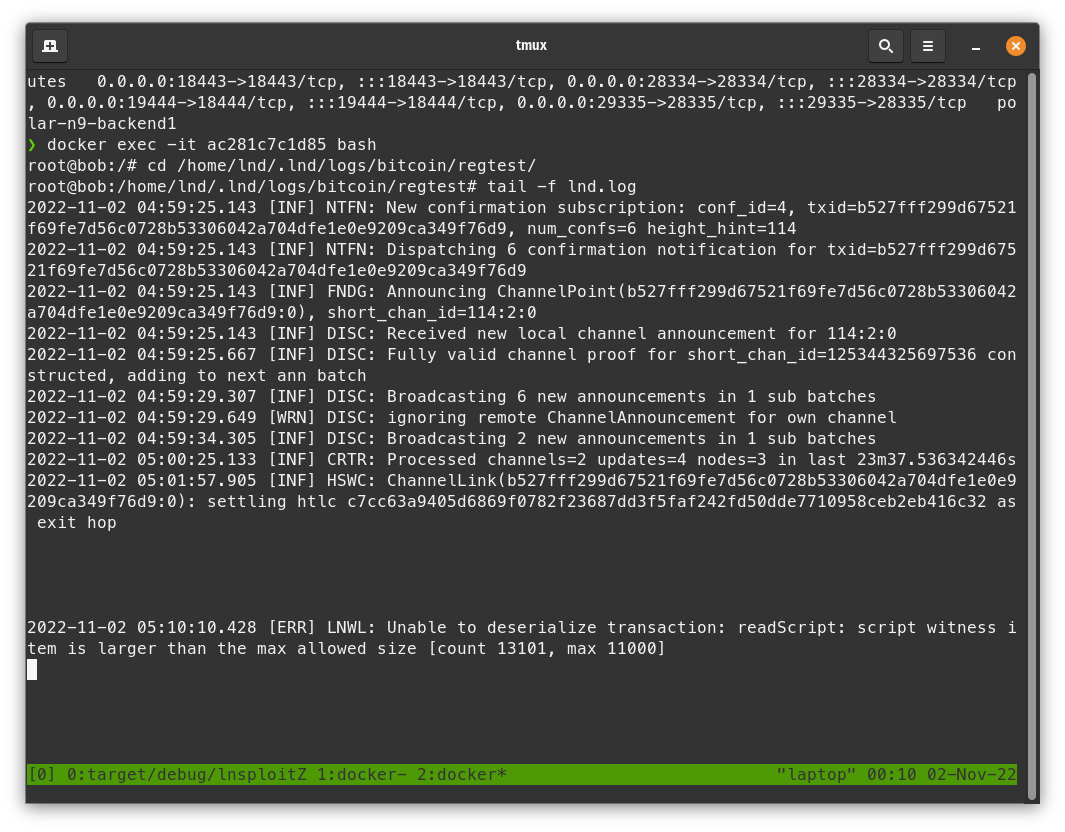 Let's broadcast the previous channel states that reflect a better balance for us from before we paid the invoice. 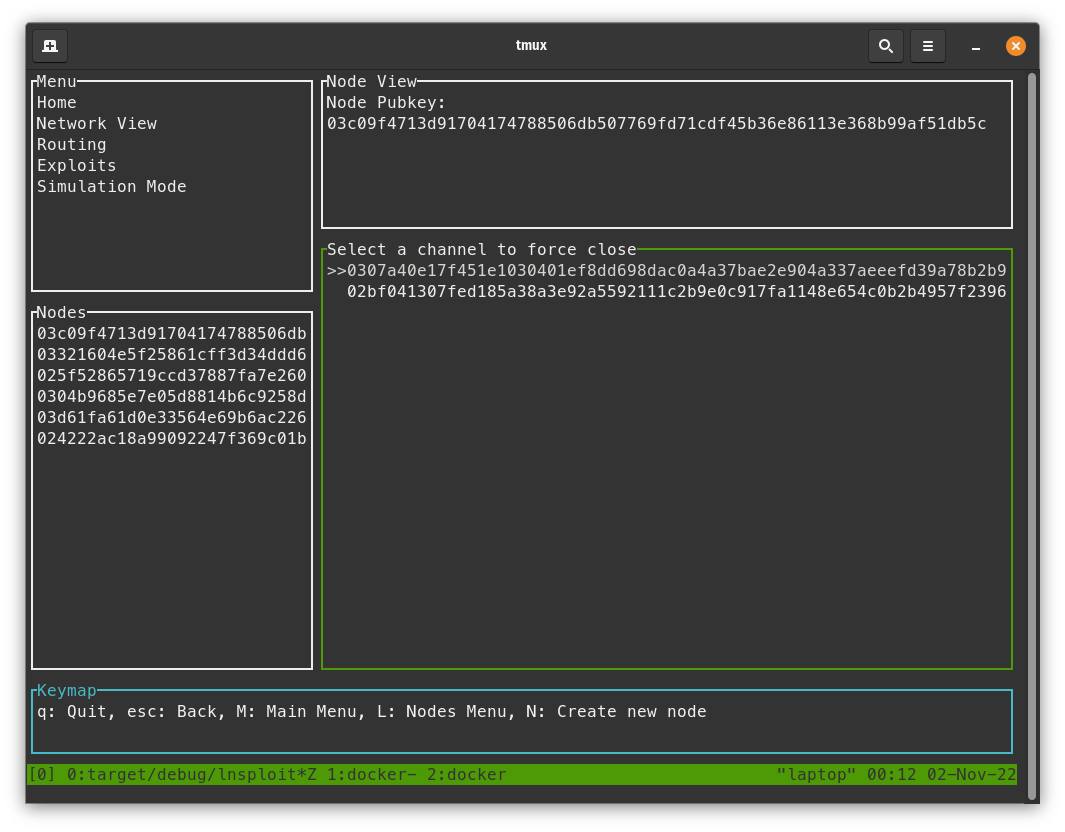 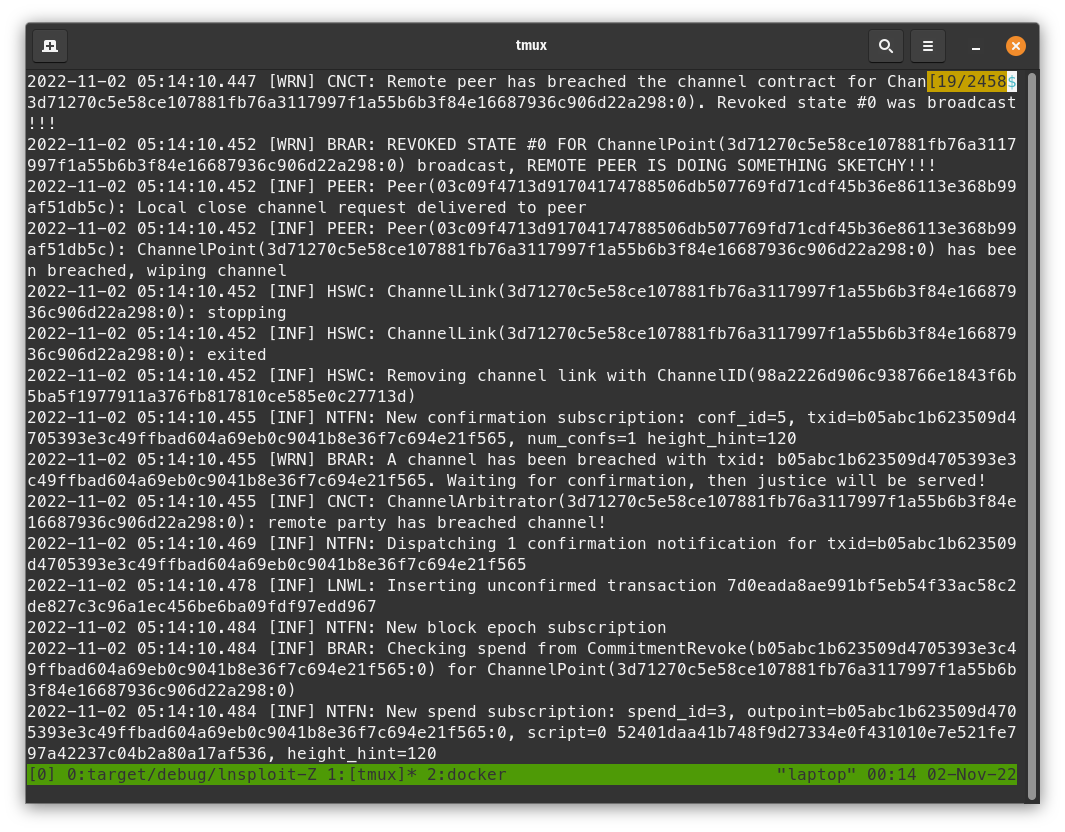 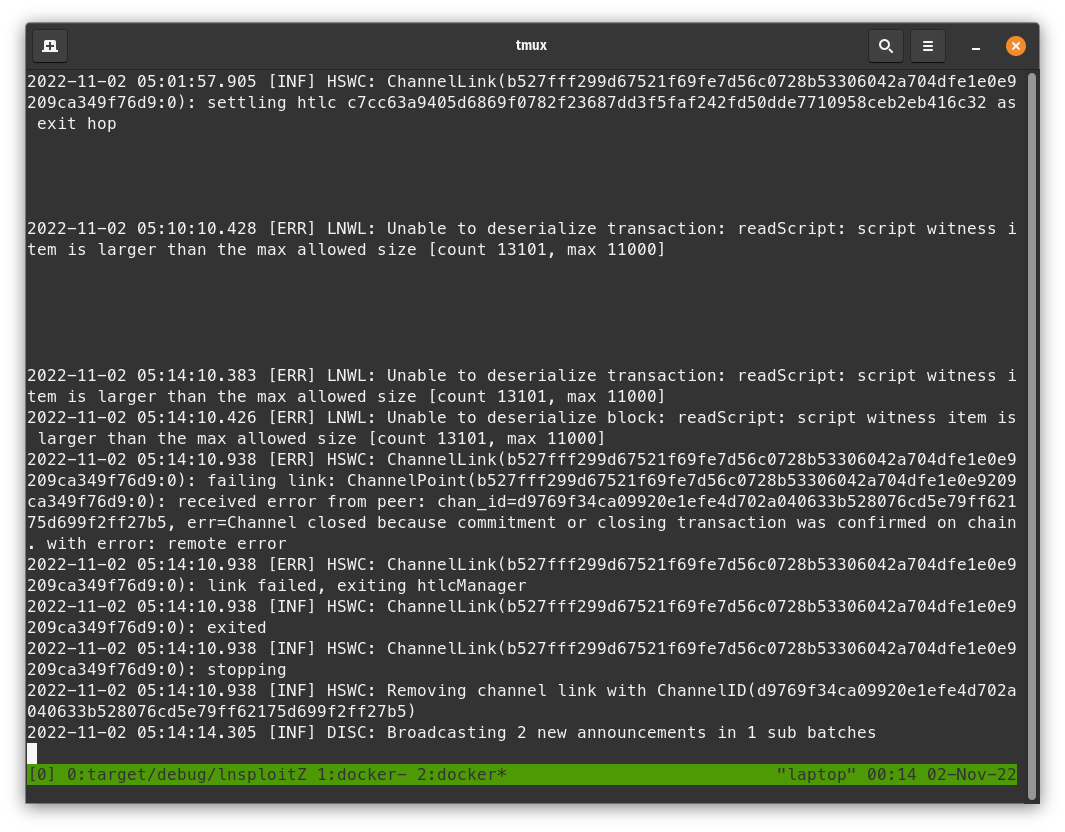 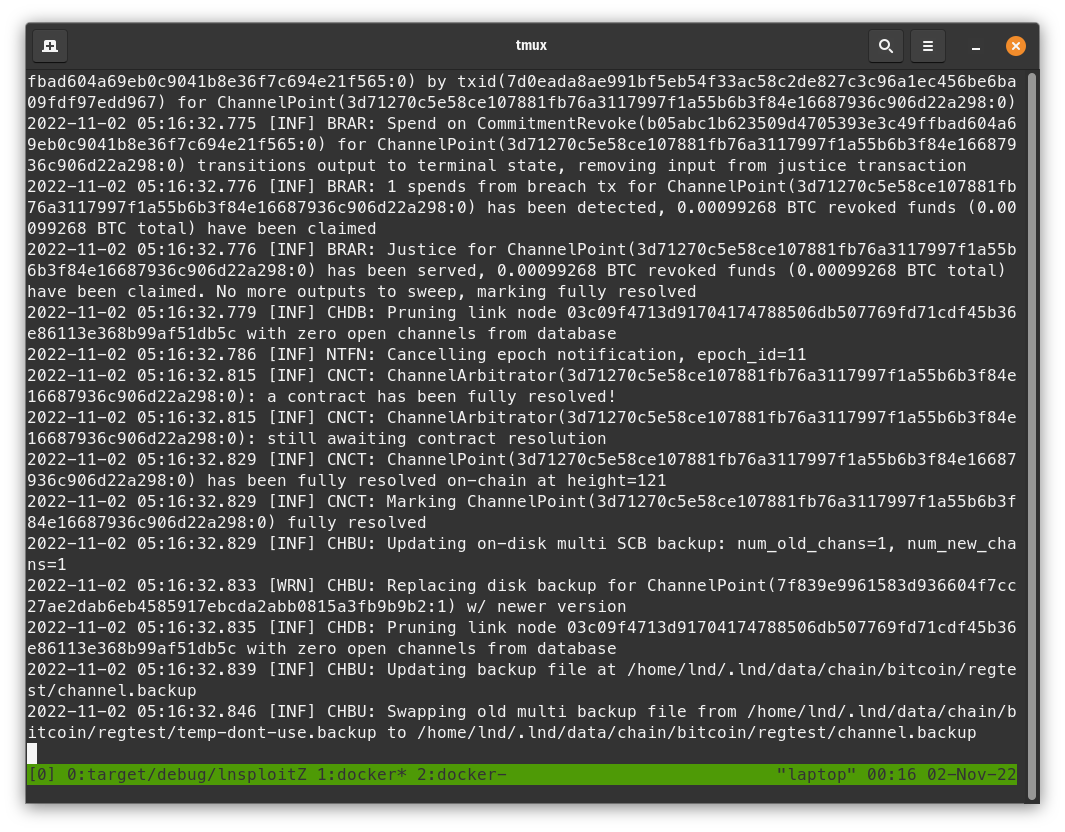 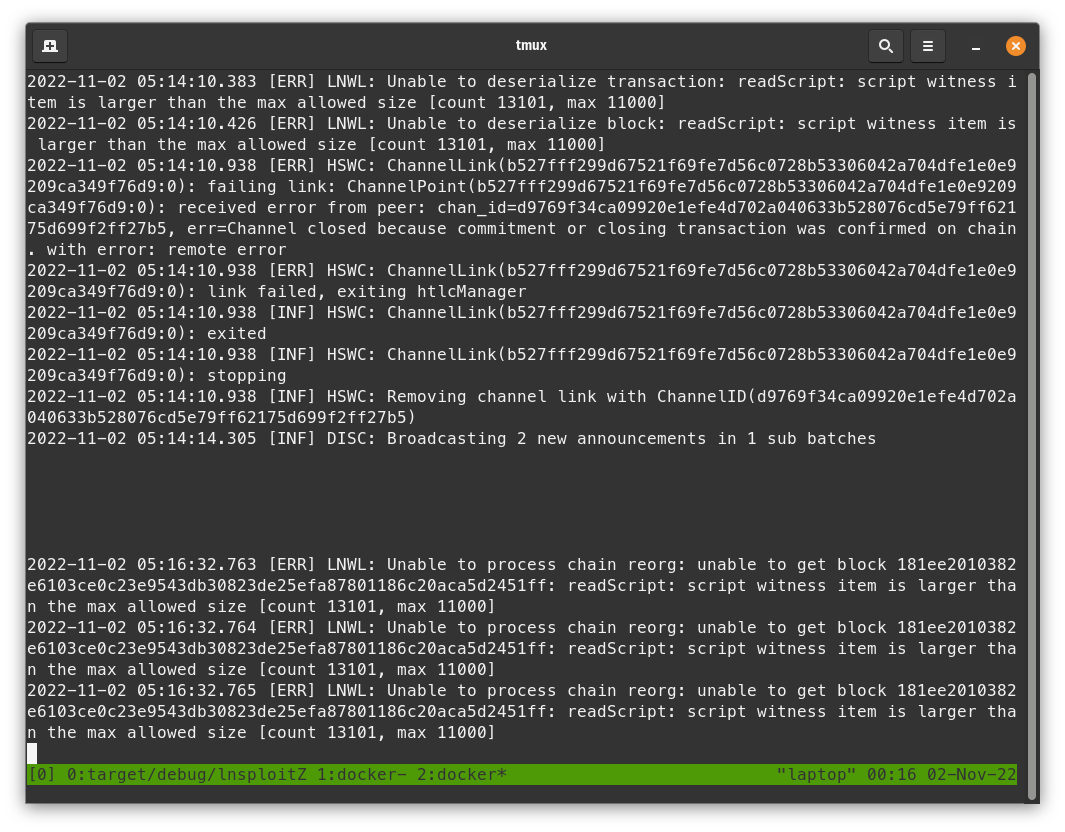 Congratulations! After enough confirmations, your LDK node should be able to process the revocation transaction and redeem the time-locked funds. Unless Bob updates to the latest LND version, he will not be able to broadcast a justice transaction given that he doesn't even know the commitment transaction was in the bad block.

To demonstrate that LNsploit can now break v0.15.3 and under, now let's break the Alice node. If you want to go through the effort of creating a new channel with Alice and doing this all over again, you can go ahead. But for simplicity, I'm just going to mine a block with a transaction that recently broke LND again, to demonstrate that it works. 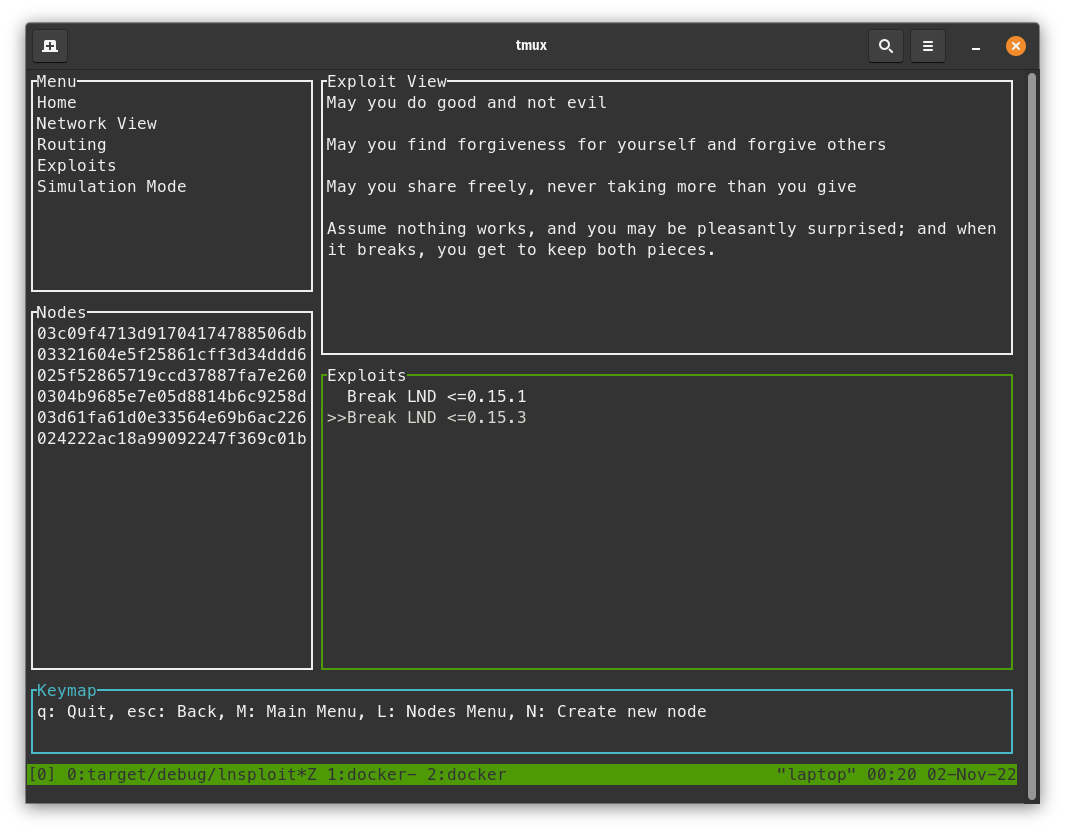 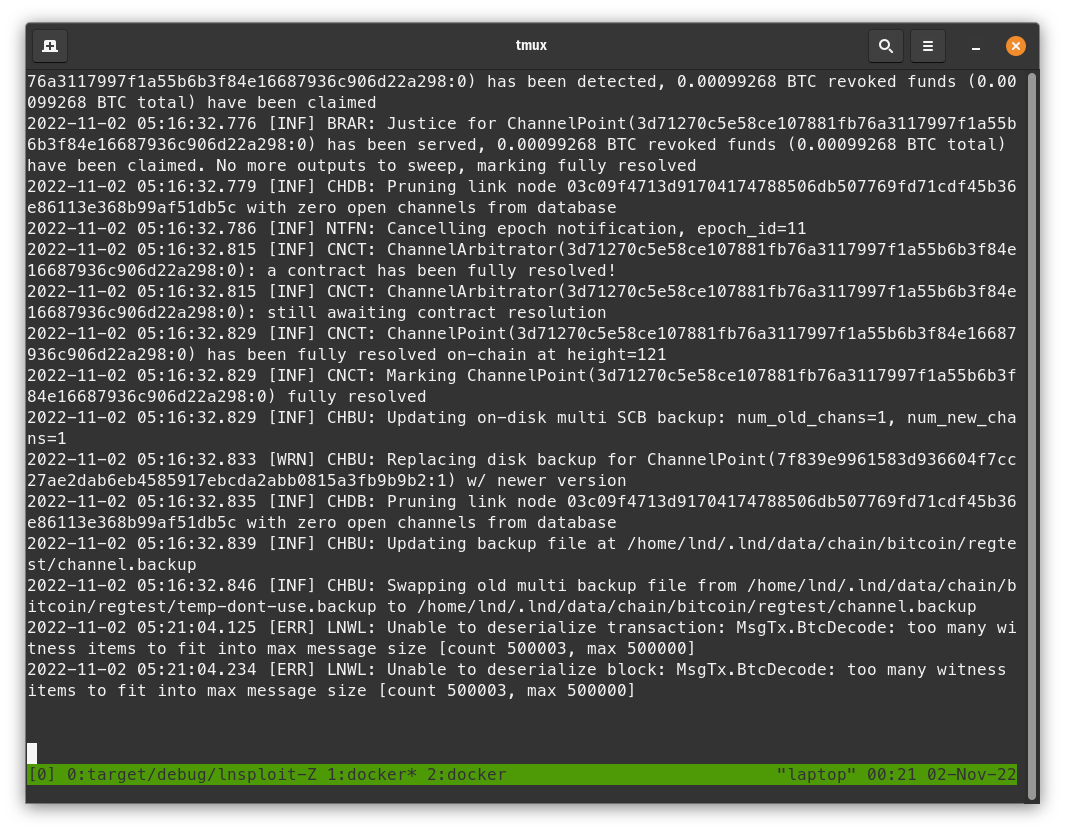 Now you just broke Alice too! If Polar had the recent version of LND v0.15.4, you could play around with that to verify that it is not affected by this latest bug.

Some Ideas of what you can test while you are here:

At this point, you've successfully broken a few different versions of LND with LNsploit and you've even been able to steal funds! It is too late to utilize this now on testnet / mainnet (actually, I believe the latest bug hasn't been executed on testnet yet!). If you would have used this tool to coordinate with Burak while he broadcasted his breaking transactions, you could have possibly stolen funds on mainnet too. However, you would have run into the risk that the node updated in time before the channel timelock expires. LNsploit does not yet broadcast transactions with a held HTLC payment still in flight, which would allow you to steal funds in hours rather than the ~2-week channel timelocks.

I applaud the efforts of all devs, breakers, and lightning community members throughout the last month. Lightning is NOT operating in an adversarial environment and if we're going to be serious about this $100M+ network that this entire industry is building upon, then we NEED things like this to happen to grow, learn, adapt, and be resilient. I appreciate the way Burak has gone about this and, to my knowledge, without trying to steal funds, especially knowing that LNsploit existed since we chatted about this at TABConf. Hopefully, I can continue to work on LNsploit during my free time and push the limits of Lightning myself. I feel the moral obligation to. If we don't do it, and lightning developers don't consider it, then someone with malicious intent will.

Thanks again to Ben Carman, Paul Miller, and w3irdrobot for thier help in LNsploit. If you would like to contribute, please find the code repo here: https://www.nakamoto.codes/BitcoinDevShop/LNsploit 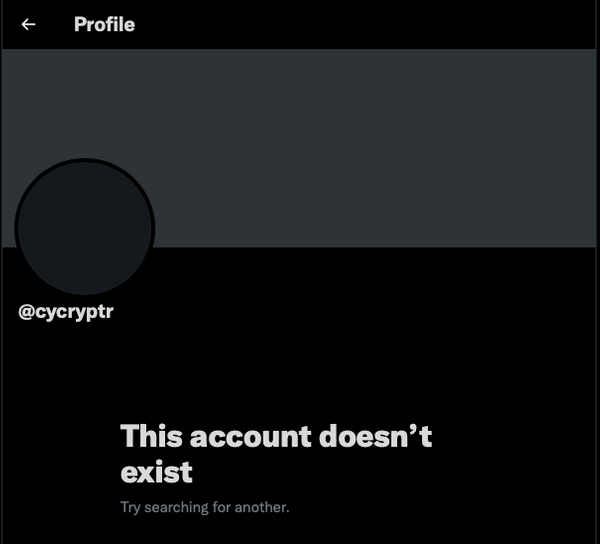